There is often no need to do anything special to attract what you want.
In the past we made it known that we are interested in old Bibles.
The older the better.
We have reported on December 1, 2010, how we acquired in Anchorage AK, a KJV Bible published by Oxford University Press in 1889.
Since then friends are calling us with tips where an old Bible is available.  Sometimes we are being told "Someone has an old Bible and want to place it in good hands."   We love to provide a home, a good home to aged Bibles.


THE 1812 LONDON BIBLE IN TWO VOLUMES

A few weeks ago a friend called to say, "My brother wants to give away the old family Bible."
How old is old?  In that case it is 201 years old.
Below are photographs of the colophone pages. 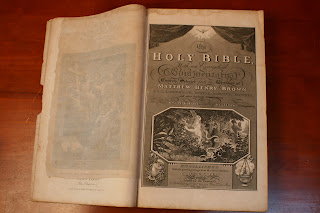 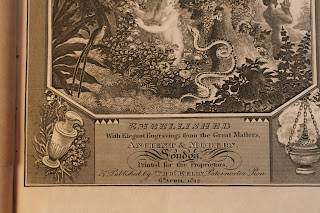 The second volume is the New Testament.
It was published in 1819 in London.  The physical sizes of each volume do not match.  ﻿There is a different printing house. 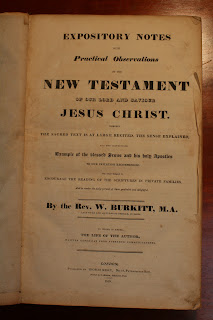 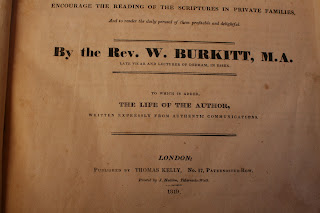 The extensive commentary to the New Testament was written by the Rev. W. Burkitt. 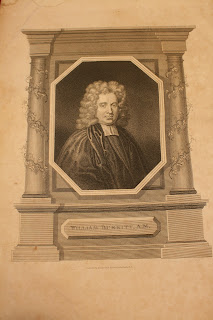 The provenance of this two volume Bible is now partially known.
The Bible was brought to the U.S. in the middle of the 19th century by a couple of English immigrants who settled in Mid-Michigan.  They were Frederick Alcock and his wife Clarissa Alcock (nee Raymond).
Their daughter Mildred Alcock, born in Saginaw-Frankenmuth, Michigan, married Reginald Richards.
Their daughter Constance Betty (1923-1981), married George Rudy.
Their daughter Dorothea Louise Rudy (1942-1996) married a mid-Michigan gentleman whose last name was Handlovits.  They had eight children.
Their son Matthew (1967-) gifted us their family Bilbe.
Further research attempting better idenify the approximate date of the Bible's journey to America, is ongoing.
(Updated 7-25-2012 via Matthew Handlovits)
﻿
﻿
﻿
Posted by Mandy Lender at 1:05 PM 5 comments: